I went to the Glastonbury Festival. I think it was my tenth Glasto since 1999.

I won’t go into too much boring detail, but I just wanted to record some of my thoughts and experiences and share them with you. 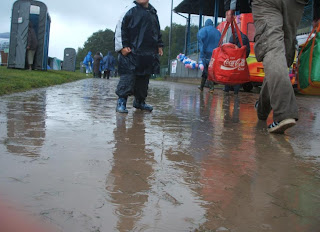 Firstly, I was cunning enough to wear my wellington boots down there – I saw a great number of lost flip-flops, trainers and deck shoes (seriously!) lost in the mud on the way in. However, it seems people arrive earlier and earlier each year, with the result that, even though I was there from the early afternoon on Wednesday, it was impossible to camp in my favoured field, Pennards Hill. We ended up a few rows in opposite the Other Stage. I was a little nervous of this at first, as that was where I camped in my first year, and was surrounded by very dodgy types and had to kick about 5 people in the face over the course of the weekend as they attempted to burgelize my tent in the middle of the night. What I had forgotten was, since the MegaFence went up in 2001/2002, you get a lot less of them around. The first night passed fairly uneventfully, although I ended up talking drunken nonsense with lots of already very messy people.

Thursday daytime was equally chilled – I don’t remember us doing a great deal, although i did attempt to get near the Dance Village’s Wow Stage to catch Ms Dynamite. Big mistake. Even though I rocked up an hour early (big nasty dubstep headz Trolley Snatcha were playing beforehand and I wanted to check them out also), the surrounding field was already packed full of young people. Now, one of the downsides of this year’s festival was the amount of idiots there. Not theiving scummy idiots, but young, slightly posh people whacked out of their brains on young people’s drugs (K or M-Kat or Kitkat or whatever they’re doing these days). I have no problem with young or posh people having a good time, but I do have a problem when 500 of them are shoving past me with nary an apology or thought for anyone but themselves( and they really DO shove. Nasty nasty types). I’m sure I remember folk having more manners in my day. Anyway, the upshot was that we couldn’t hear anything but the bass, so we beat a tactical retreat.

Thankfully, the rest of the weekend, I caught a lot more music and had slightly less annoyance. 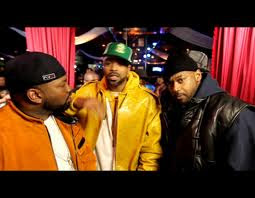 Friday was kickstarted with the Master Musicians of Joujouka. I knew nothing about them except that William Burroughs had named them (frankly, that would usually be enough for me). Turns out that they are a bunch of dudes with drums and massed pipe instruments who make a constant noise which unfortunately sounds a bit like Scots bagpipe music without the tunes. After about half an hour, guess what? We beat a tactical retreat. Next up for us were Two Door Cinema Club, some very young chaps from Ireland with very young silly hair. They make a great hyper-pop-indie-dance noise, though. Top marks for effort. After that, I waded to the front for what I was imagining would be my highlight of the weekend – THE VERY WU TANG CLAN themselves. After a long wait I had finished my home-mixed whisky and coke and had started on the straight whisky (at 3pm. Urgh), and befriended some nice (but, again, very very young) ladies who were working at the festival. I told them that I was hoping it would rain for the Wu, as I didn’t consider them sunny-good-times music. This made me somewhat unpopular, for as the Wu took stage, the heavens opened. So how were they? Well, firstly Raekwon wasn’t there, for some reason (hrm, possibly because RZA had flown in to be there after not attending the rest of the European tour? Who knows), but RZA, GZA, Masta Killa, Ghostface and Method Man were all present and correct, and watching GZA, Ghost and Meth indulging in some synchronised dancing was possibly a highlight of my life. The whole thing was very 1993 heavy, which is no bad thing at all, but I missed hearing some of the awesome later stuff. Couple of solo bits too – most wonderfully Masta Killa’s Old Man, but, on the whole, from where I was (right at the front, of course), the sound was pretty appalling. I’ve been told it was fine from further up the field, however. Still, I saw the Wu!
Posted by DJ Dellamorte at 09:30 No comments:

So, I’ve had a little period of musing, and I’ve decided to have a little bit of a figurative remix. As such, this blog will no longer be focussing solely on my musical efforts and DJ mixes, and will now start to include such things as film reviews and general ponderings and rants (actually, probably not so much of the ranting, but I will endeavour to shout out good causes and campaigns etc). It’s not like I’ll be winding down on the music by any means, but, well, sometimes a man has to express himself in other ways, am I right? Of COURSE I’m right.


(PS I was thinking of bashing out a review of The Fighter, which I watched last night, and was very good, but I'm just back from Glastonbury and not ready to go full-on just yet. Glastonbury was fully amaz0r, as expected.)
Posted by DJ Dellamorte at 05:03 No comments:

Hey kids, as promised, this weekend's radio show over at Spiritplants will be on air Saturday at midnight GMT, and noon Sunday lunchtime.

I'm really buzzed about this show, got tons of truly excellent music, featuring tracks by/remixes by/remixes of artists such as Germany Germany, Udachi, Cults, Justice, Wiley, Dennis Coffey, Adele and Nero. See you in the chat!!

EDIT : Hyperlink appears to be playing up!! go to radio.spiritplants.org for your listening pleasures plz
Posted by DJ Dellamorte at 05:40 No comments: 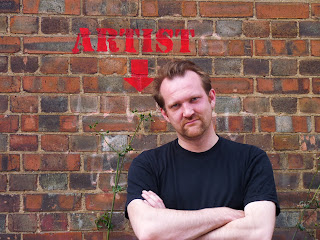 I've been away for a while, haven't I? But look! It is me! Looking all moody and having the brickwork do the talking.

Anyways, you may have noticed my radio show hasn't been on recently - in fact I took a little break but now I'm BACK with a fortnightly show on Spiritplants , rejuvenated and better than ever! Also might have one or two other things in the pipeline too, but keeping quiet for now, which has the added side effect of making me seem mysterious.

Details of the weekend's radio show coming soon!
Posted by DJ Dellamorte at 13:11 No comments: